With a show that is exciting and full of variety, this dynamic singer & showman has performed everywhere from his home town of Miami to Latin America, Las Vegas & Atlantic City. Completely bilingual and truly bi-cultural, Fernandez sings Rock, Pop, R&B, Ballads, Broadway and even Opera with the same passion and intensity that he brings to the Spanish Love Songs and Latin rhythms of his Cuban heritage. With an amazing voice, extensive repertoire,  commanding stage presence and charming personality, it is not surprising that Fernandez has had a very successful singing career spanning over three decades. He is one of the few Miami singers who can honestly say that his voice has taken him around the world. Many who remember Peter Fernandez from his early days as a band singer and local teen idol consider him to be one of Miami’s true living legends.

Currently Fernandez, accompanied by a 12 piece band, is thrilled to be enjoying an unexpected and unrivaled almost 4 year run at Magic City Casino’s Stage305. His show can only be described as a major 70’s & 80’s Dance party “event”.  Held every other month at the Casino’s main entertainment venue, Stage305, Peter Fernandez & The Open House Band are a huge hit with Miami’s Baby Boomer generation. Many others who also love the music of that era are flocking to the show.  An enormous mirror ball, high tech lighting and a high energy Deejay, Carlos Dj. Sonic, keep everyone on their toes before, in between and after Fernandez performs 2 live shows on the big stage.

Peter Fernandez and his great show band are a fun filled and highly entertaining evening for live music lovers and dancers alike.  A magical evening where everyone is sure to have a great time while Fernandez and his team of professionals, sound & light techs, artists and musicians alike cast their spell on Stage305  transforming it into a fabulous show place and dance club reminiscent of the great discos and showrooms of a bygone era. 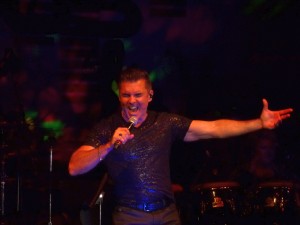